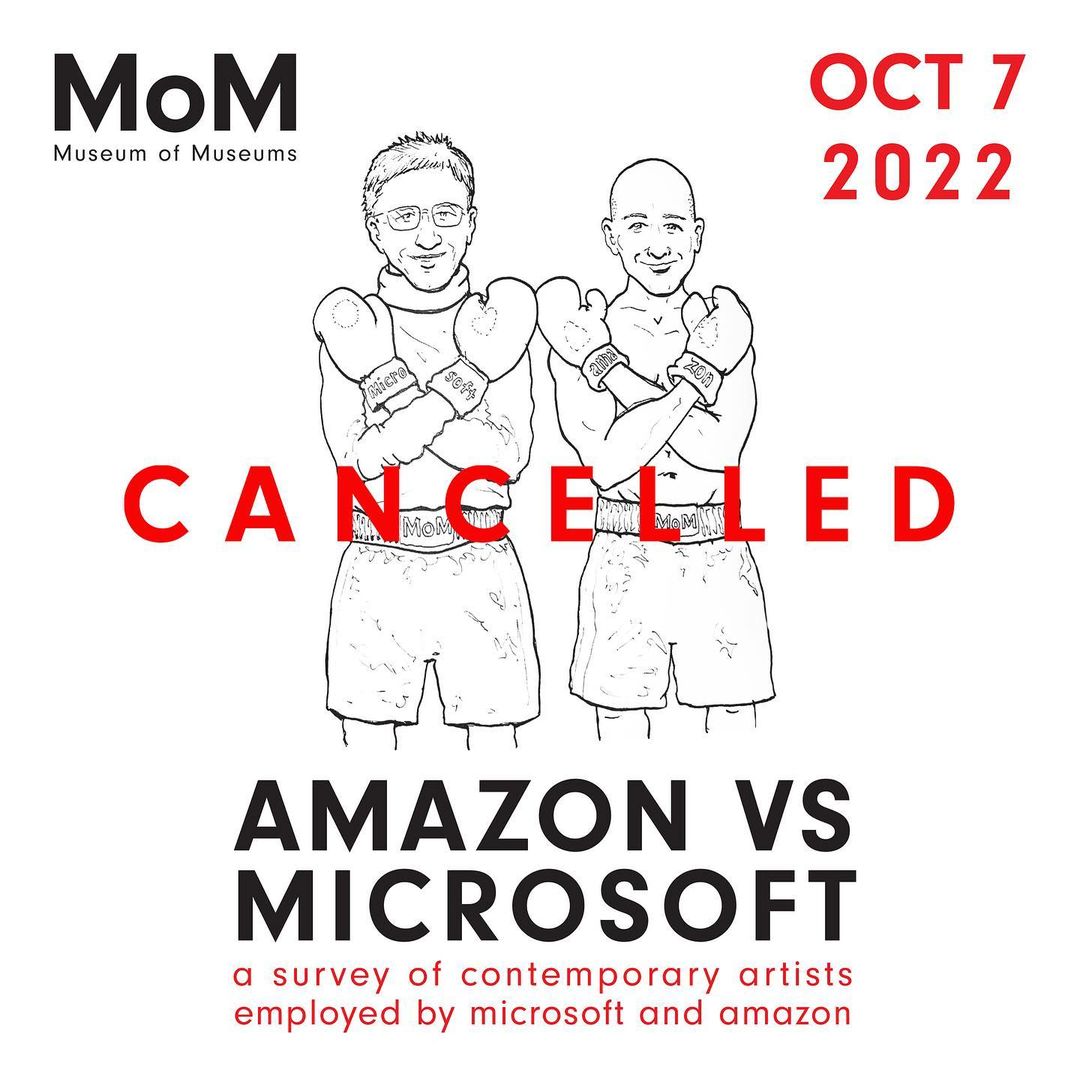 After receiving backlash from the local arts community for its new exhibition, “Amazon vs. Microsoft,” the Museum of Museums (MoM) in Seattle, Washington has decided to cancel its plans. On the MoM’s Instagram page, director, Greg Lundgren, wrote a lengthy apology on July 19th to the museum’s audience.

The exhibition was intended to be a showcase of artworks from Amazon and Microsoft employees — a workforce which collectively make up the two largest technology companies in the Pacific Northwest. In a previous post on July 16th, Lundgren explained the purpose of the exhibition: “to highlight and underline the artists working in big tech and recalibrate the narrative around what a tech worker is.”

With over 1.5 million employees between the two tech giants —  between Microsoft’s Redmond campus and Amazon’s Three Spheres’ headquarters — the MoM wanted to rewrite the narrative surrounding Amazon and Microsoft. Besides the extreme profits which define the companies, the MoM “believe there is an alternative and equally impressive wealth of artistic talent within their ranks.”

The exhibition permitted any current employee of either Amazon or Microsoft to submit their artwork, in whatever medium, for assessment as an open-call exhibition. The museum set the deadline for August 20, 2022, and the exhibition would open on October 7th, 2022.

WIthin a few days, an uproar from the arts community of Seattle forced the MoM to pull the plug on the project. Many individuals were upset with giving Amazon and Microsoft employees an artistic platform. Rather than providing inclusion to struggling artists, the exhibition was only benefiting the “tech bros” by providing them with exposure. In general, many people in the public have derided Jeff Bezos and Bill Gates, and the companies they founded, for contributing and sustaining wealth inequalities in the U.S. An exhibition Amazon vs. Microsoft” would, in their minds, be not only hypocritical, but extremely offensive.

A comment by artist Rikisaphotographer to the July 16th Instagram post reading the following: “Your site says your mission statement is to ‘increase the artist population of Seattle.’ Looks like you plan on accomplishing this with an interesting and homespun approach to gerrymandering. Neat.”

After the backlash, the July 19th post attempted to explain the context surrounding the exhibition. Lundgren wrote: “MoM was founded with the purpose of strengthening our broad and diverse arts ecosystem. That is it. And I believe that the strongest arts ecosystem is also the most inclusive one. Tech bros included. Poor people, rich people, people with shared ideals and people with strange ideas. Everyone.”

With the recognition of the wealth inequality of America, specifically in Seattle, the exhibition was an attempt “to connect the disconnected” through the arts medium. The necessity to build a larger artistic network, including the “tech bros” within it, would, hopefully, give all artists “enough opportunity, visibility, support and community to stick around.” As Lundgren wrote: “And rightly or wrongly, I thought that the most mighty economic engine to support local art was the tens of thousands of people employed by high tech in this city.”

In the final section of the post, Lundgren recognized that the reaction indicated that this “was not the way to have this conversation.” While the MoM’s mission statement includes to “‘increase the artist population of Seattle,” the exhibition “Amazon vs. Microsoft” has done little to help.