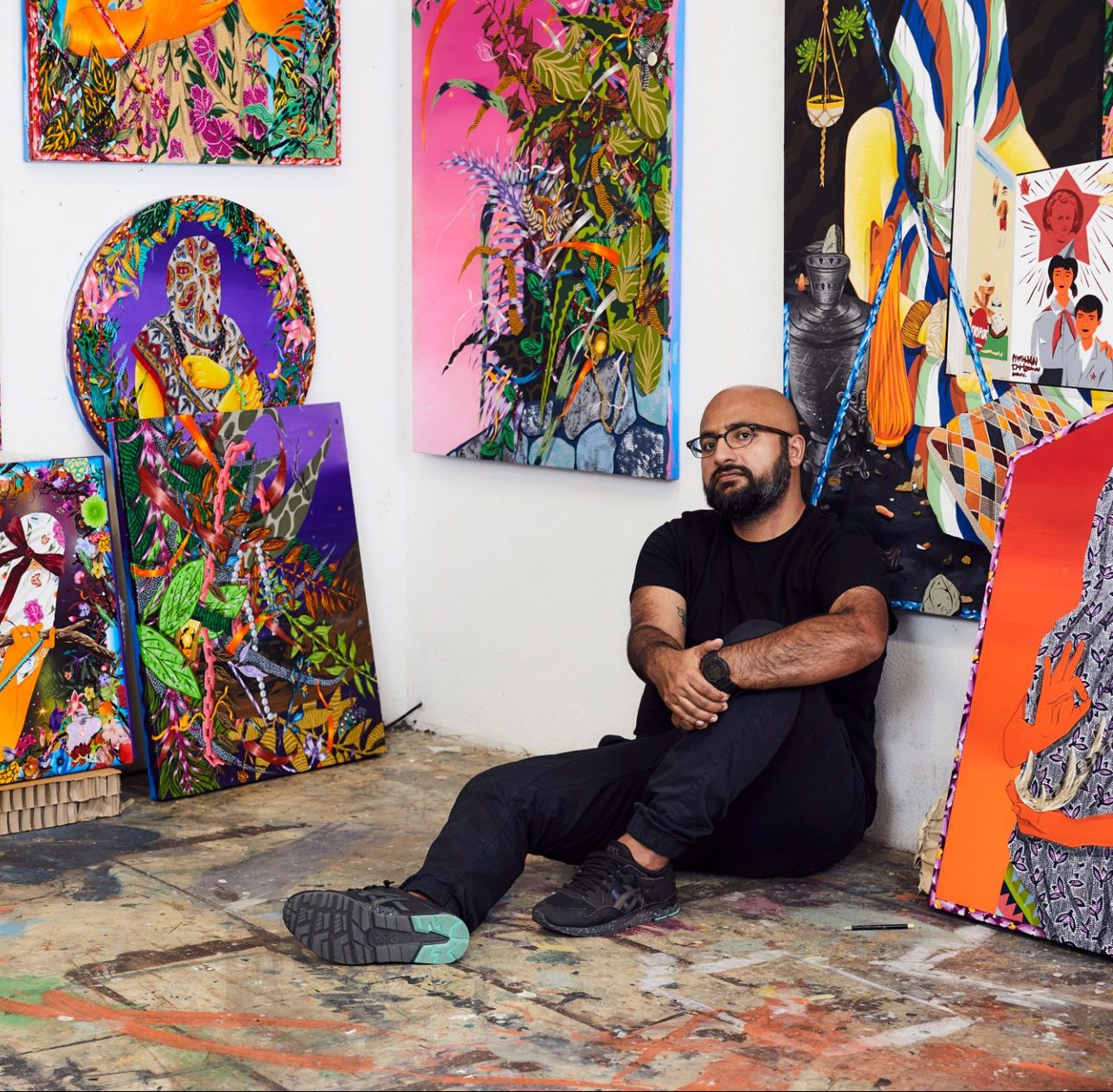 Amir H. Fallah ’s colorful, profoundly patterned figurative paintings embody the personal and ubiquitous. Amir’s work echoes childhood memories, cultural legacies and modern-day issues, notions of identity at large, and his own experiences as an Iranian American. Fallah’s adorned canvases merge with painting, collage, and graffiti with references to punk rock, skateboard graphics, Persian miniature painting, psychedelic imagery, celestial spaces, and the realities of refugee camps, homelessness, self, and the surrounding theme focusing on identity and diaspora.  Amir H. Fallah works in sculpture, installation, and photography. Fallah received his MFA in Painting at the University of California, Los Angeles, and has exhibited in New York, Los Angeles, Tehran, Hong Kong, London, Paris, and Dubai. His work belongs in the collections of Pérez Art Museum Miami, the Nerman Museum of Contemporary Art, the Smart Museum of Art, the Davis Museum, and the Salsali Private Museum.

This is Amir. H Fallah ‘s story, career arc, what he’s studying, and advice for young artists who are just starting:

Where are you from and how does that affect your work?

I was born during the Iranian revolution and shortly after that a war between Iran/Iraq started. We left a few years after the war started and lived in Turkey and italy before moving to America at the age of 7 as a refugee. We showed up to America with $72. My parents started from scratch in their late twenties and rebuilt their life slowly in Virginia

When did you first discover that art was your medium?

I discovered art at a young age. There wasn’t anyone in my family that was an artist so I never took it too seriously until the age of 14. Now that I look back as an adult I realize that there were hints early on but I don’t think my family recognized it. However my parent’s were always supportive of my interests. I would ask to take cartooning classes and they would sign me up. At first they thought it was just something I liked to do in my spare time but by the time I became a teenager they realized I had a deep passion for it and encouraged me to pursue it.

Do you remember the first piece of art you sold? What was it about?

I was about 19 or 20 when I first sold a work. The work dealt with similar themes that you can find in my work now. They dealt with issues of identity, race, and being this kind of cultural hybrid. All the ingredients were there but the ideas and techniques weren’t refined.

I think of myself as a cultural chameleon where I don’t one hundred percent fit into any one group. I never feel fully Iranian or American. I’ve lived in Los Angeles for 20 years and I interact with Mexican culture daily. It’s a big part of my life. I feel more at home around Mexican culture than I do with my own Iranian background. A lot of my work explores these ideas of being a cultural hybrid and the issues surrounding it.

How does your work comment on current social or political issues concerning Iranian identity and diaspora?

I’ve always been interested in portraiture and how misleading it can be. What someone looks like rarely tells us much about who they are, what they believe in or what their life is like. I wanted to create work that took the history of portraiture and turned it on its head.

Historically portraiture has always been about what we physically look like. I’ve always found that to be very misleading. For instance, I’m Iranian, but I’m very dark skinned. People always assume that I am Indian or Mexican. My wife is Puerto Rican, but she has bright red hair, freckles and fair skin. Living together we’ve realized over the years that what we look like says nothing about us culturally. This realization lead me to think about ideas on how we can reimagine a portrait.

My veiled paintings are portraits of real people. Each painting starts with a photoshoot where I go into my subjects home and do an informal interview with them. We walk from room to room and discuss the objects that they live with. Mundane objects such as a handmade quilt sewn by their grandmother, a special piece of decor, or a historical relic can be charged with memories, histories, and experiences that allow me to get to know them on a deeper level.

I use these objects as elements in a still life with the subject at the center. Their face is always covered with a fabric or garment from their home hiding their physical identity. The body is turned into a shell that meaning is projected onto. All hints of race, age, gender and beauty are erased. What you’re left with is a portrait via the debris of life that looks past the superficial.

Which current art trends are you following right now? I see that you’re into NFT’S. How did you get into the NFT world?

When I first learned about NFTs I was confused by them. I’m a curious person by nature so I decided to dig deeper and learn about them. I learn best by doing so I decided to jump headfirst and explore what it means to make work that only lives digitally. That was about a year and a half ago and I’ve been involved in the space ever since.

Many get frustrated by NFTs because collectibles and art gets lumped into the same category. It can be very frustrating to see collectibles sell for millions and be called “art” in the press. The NFT space is simultaneously exciting and messy. It’s an extremely experimental space right now but I see a lot of potential in what is possible. I look at creating NFTs as  the same as if I were doing ceramics or exploring some other material or way of image making. I’ve been making purely digital works for the first time and it’s been very rewarding. It’s a new opportunity to experiment and reach a new audience. I find that exciting.

Who are your biggest influences and what is inspiring you at this moment in time?

I think of myself as an amateur archeologist. I go down these rabbit holes that I get interested in. NFTs was one of them, but right now,  I’m really invested in the work of Frank Stella.  I’ve been reading a lot about him and his early work has had a huge impact on me. I’m also interested in Persian miniatures. That’s something that’s been an ongoing interest of mine for the past 20 years. A lot of my newer work references a wide variety of high and low images and creative movements. Everything from turn of the century design and illustration to dutch and flemish painting from the 16th century.

Which of your pieces took the most time to make?

I recently completed a very challenging public art project. it took four years to realize from concept to completion. It’s called “Portal” and is a permanent site-specific series of sculptures commissioned by the LA Arts Commission. The piece is a set of 3 large stained glass sculptures which was incredibly complicated to produce. Not only is stained glass a medium that is complicated but using it in an unorthodox manner raises many issues. I worked with a team of engineers, architects and fabricators to create the work. I usually work alone or with a couple of assistants so working with so many rules and collaborators was a daunting task but well worth the final result.

When is your favorite time of day to create?

I love being in the studio so I’m not too picky on times. I have a family and keep regular office hours. It’s a thrill to be able to do what I love as a career. I never take it for granted and wake up everyday excited to go and make work.

What does your work aim to say?

My work is about my own life experience, my wants,  my needs, my desires, my fears. I want the work to be a document of this time. I hope that people can look back on it  many years from now and have a better understanding of this particular moment. I hope that I’m able to capture that in a genuine, thoughtful, and interesting way that stands the test of time.

What are you currently working on?

I’m making a painting about Christopher Columbus right now relating to the Taino Indians and the Caribbean. I’ve made several paintings about Columbus. I was inspired by my wife’s family who all come from Puerto Rico. Exploring  the history of the Caribbean has been a way to teach my son about his Puerto Rican roots.

The last painting I made about Columbus was interesting because I began the piece before the killing of George Floyd. I was thinking about colonization and it’s lasting effects on the Caribbean. As I was about to finish the painting protests broke out all over the country and Columbus statues were being taken down in many cities. It was a timely coincidence that brought my artwork, history, and current events together in real time.

What words of encouragement and inspiration would you tell an artist who’s just starting in the art world?

The best advice I can give is to treat it like a marathon and not a sprint. Art isn’t something that you can conquer in a few years. It can take 20 years to really get somewhere. Be patient and diligent with your work. Make art everyday, read all you can about it, and see as much as possible. Immerse yourself in art history as well as contemporary art and see how you can add your voice to the canon of art. It’s a big task that can take a lifetime to accomplish but it’s worth pursuing.

Amir H. Fallah is one of those rare artists that makes you look at yourself, how you identify yourself, inside, and what surrounds your environment that tells the story of you.