“I believe that the only reason someone should not want to wear one of my pieces is that they don’t like it—and it’s fine if they don’t, by the way.” This is how Tallulah Willis describes her new brand, Wyllis, whose central tenets are size inclusivity, accessible price points, and a fundamental belief in fashion as advocacy. Primarily an actor, Tallulah decided to make the leap into the fashion world earlier this year. She launched the label’s first series, vintage-inspired slogan crewnecks, in January.

Purchases of this first release will directly benefit the National Alliance on Mental Health, as a portion of the profits will be donated to that charity. Willis has been vocal about her own struggles with an eating disorder and has long been an advocate for body positivity and prioritizing mental health. It makes sense, given that, that she feels strongly about cultivating a body-positive brand whose profits will help people who are struggling with their mental health.

Wyllis’s launched its second stage, a full collection, on July 22, and it shows the same vintage sensibility as the capsule sweatshirt collection did. Inspired by the 1940s and 50s, it showcases colorful collared shirts in playful prints and pants with a similarly whimsical aesthetic. They are intentionally comfortable and the collection emphasizes no-fuss ease. Despite the fact that this collection was designed last year, the pieces are perfect for quarantine and for summer in general.

Though still expensive compared to fast-fashion brands, the brand is still accessible compared to most high-end fashion. With $85 sweatshirts, $150 shirts, and a $275 dress with a sentimental backstory, this collection is not cheap, but it is still within the range of affordable. 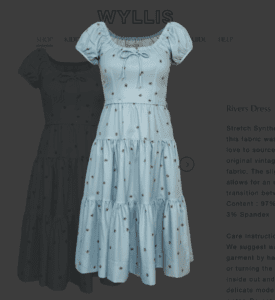 Willis says she drew inspiration from her own life, especially for the collection’s tiered-skirt baby doll dress in a pale, bright blue. Willis says, “The silhouette of that piece is actually based on a 1950s dress my mom has had since she was 19 that she loved, and then my older sister stole it from her, then my middle sister stole it from my oldest sister, then I snatched it from my middle sister.”

The current collection has sizes up to 3x, a range Willis looks to expand in the future, and 10% of its profits will go to the Loveland Foundation, an organization started by writer and activist Rachel Cargle. The Foundation provides therapy and mental health support for communities of color, particularly emphasizing Black women and girls.

For Willis, creating this brand and establishing what it stands for has been a very personal journey. As a young woman in her early days of sobriety, Willis says that clothes “became my outlet.” She’s found that “clothing and style and design” are a major part of her mental health journey. Putting together a fun outfit always lifts her spirits, and she says that she decided to create her own line because “if there’s just one person who finds that clothing can bring a sense of safety, or elevate you from a low place, then I should do it.”

Jewelry Trends to Make You Feel Fancy this Summer

Must Watch Sports Films Of The 2000s

Jewelry Trends to Make You Feel Fancy this Summer