Alexandra Sipa makes clothes out of discarded electrical wires. The 23-year-old designer is a class of 2020 graduate from Central Saint Martins, an art and design college in London. Recently featured in Vogue, Sipa’s graduate collection is focused on sustainability and is called “Romanian Camouflage,” a nod to her roots growing up in Romania. 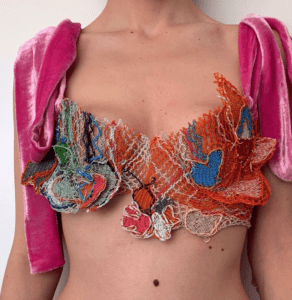 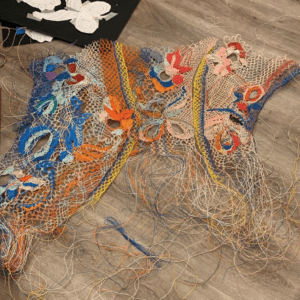 Sipa’s original inspiration came from a pair of broken headphones. She was researching for a sustainability project in her second year at CSM when the colorful wires inside started to show through. The designer wanted to find a way to reuse them instead of just throwing them away, and that desire became her final collection. 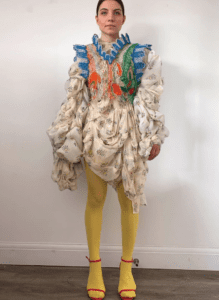 Growing up with a lingerie designer for a mother, Sipa has been interested in design since a very young age. That love of design meshes with her Romanian heritage in this collection, especially after a trip to visit her grandmother in Bacau last year deepened the designer’s interest in her country’s fashion. The bright colors bring to mind the vibrance of Romanian women’s clothing in the capital city, and Sipa says that “most of the fabrics I used have a Romanian attitude. Very nonchalant, humorous, and adaptable.” 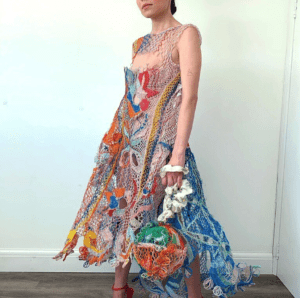 Family is very important to this collection. Sipa’s mother and grandmother both helped with sourcing wire and making lace for some pieces in the collection. When it comes to the art of recycling and sustainability, Sipa’s grandmother is definitely her primary influence. By turning used electrical wires from a Romanian construction site into a high-fashion collection, Sipa has definitely lived up to the way she describes her grandmother: “she will make any object look like a treasure, no matter where it came from.”