If you’re looking to spice up your lingerie collection, look no further than Cicely Travers’ brand, Isosceles. The bras, underwear, and bathing suits from this label are a refreshing change from the muted colors and bondage-inspired styles of many undergarments on the market today. Each piece has an avant-garde twist, whether that be its color, shape, or the elegent-yet-quirky details Travers adds. 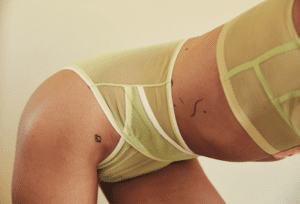 This brand is not about perpetuating myths of female beauty, but rather about helping each individual person who wears an Isosceles piece feel beautiful. Even the briefest (pun intended) glance at the label’s Instagram will show you that—it feels somehow both casual and professional, both forward-thinking and nostalgic. The models themselves are an important part of creating this impression. Travers tends to show her designs on artists and creatives she admires rather than on commercial models.

Their bodies and identities are as varied as the bodies and identities of the people buying the pieces. The images Isosceles shares show that no matter what size or color their bodies are, no matter their gender identity or sexual orientation, anyone interested in the brand’s designs can and should purchase them. The brand is socially conscious in other ways, too, as with its commitment to donate 100% of proceeds from the sale of the Infinito Brief to Black Minds Matter, a charity that seeks to connect Black individuals and families in the UK with professional mental health services. 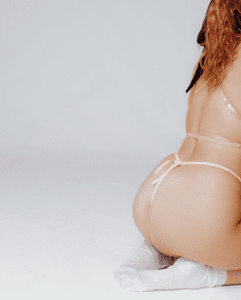 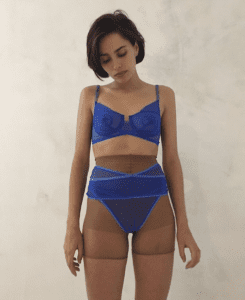 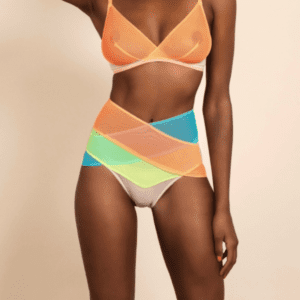 Travers’ path to the design world has been as unconventional as her pieces. The daughter of a seamstress who made leotards for the Royal Ballet School, Travers grew up in London and learned to sew as a young child. She loved over-the-top styles, something that has not changed if her label’s aesthetic is any indication, and always tried to show off her lingerie. In her mind, underwear should not be worn under one’s clothes, but rather celebrated as another layer of the outfit. 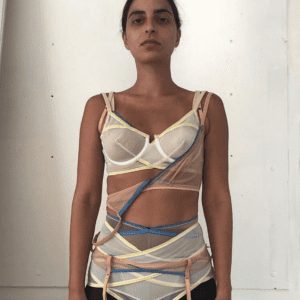 The designer dropped out of university initially, after having begun her degree with a focus in fine art, and went to work at Rigby&Peller, a lingerie shop next to Harrods. There, she learned about De Montfort University’s program in underwear design, a degree she went on to pursue and complete. After working briefly with lingerie designer Jean Yu in New York in 2006, Travers knew she wanted to launch her own line.

Formally established in 2014, Isosceles’ focus is on playing with classic shapes in unexpected ways. These can include extra-high-waisted underwear, drawstrings controlling the amount of coverage on the back of a bathing suit, and adjustable cords that make pieces adaptable to a wider range of body sizes and types.

Travers’ physical location plays a role in her design, she says. When she moved to Italy last year, her characteristically meshy, brightly colored designs took on more detail in the straps and stitchings. The designer says that she “wanted to have a little bit more fun, to do some things that were a little bit more frivolous.” That move also inspired the addition of swimwear to the label, something Travers says “you can be a bit more playful” with. Calling her creations “tit bits,” as Travers does in the label’s Instagram bio, clearly shows that playful spirit. And who doesn’t want more playfulness in their lingerie drawer?

Building Your Body Image This Summer With Karmela Cosmetics

One Stop Shop For Indie Beauty Brands You Want On Your Radar This Summer!