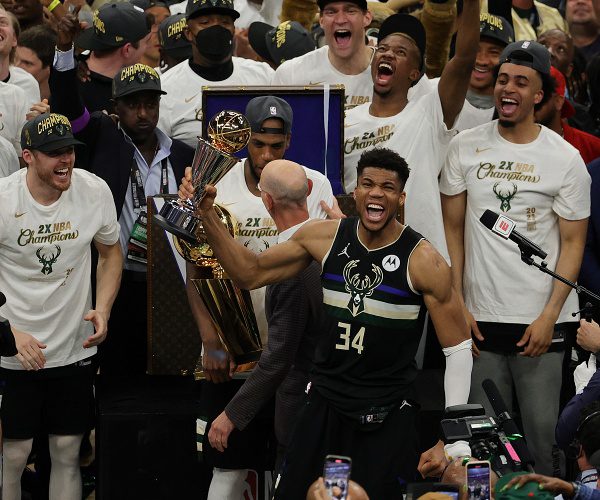 NEW YORK, NY_. On Tuesday night, the 2021 NBA season named their champion: the Milwaukee Bucks.  Following a great run in both the regular season and in the playoffs, it took the Bucks six games to defeat the strong Phoenix Suns team.  This championship is the Bucks’ first one since 1971, exactly 50 years ago.  In 1971, there were familiar names to NBA fans, like Kareem Abdul-Jabbar and Oscar Robertson.  Today, and for years to come, one name will stick out to NBA fans, and that name is Giannis Antetokounmpo.

Antetokounmpo seemed to put the team on his back this entire series.  He averaged 35.2 points, 13.2 rebounds, and 5 assists per game in this series, all while putting on a defensive display with chase-down blocks, contested shots, and steals.  These numbers may not even put into perspective the performance that Giannis had through the duration of the NBA Finals.

In game six, Giannis became the first player since blocks became a statistic in 1974 to record 50 points, 10 rebounds, and 5 blocks in a game.  This performance, along with the stellar performances he put on nearly every game in the finals, led Giannis to be crowned with NBA Finals MVP.  Finals MVP came at no surprise, as some even thought Giannis may win the award without winning the series.

Giannis adding the Finals MVP to his resume puts him at an elite company at a very young age.  He joins Michael Jordan and Hakeem Olajuwon as the only players in NBA history to win MVP, DPOY, and Finals MVP in their career.  He and Jordan are the only two to have two MVPs with the other awards.

At only 26 years old, many believe that Antetokounmpo has not even reached his prime yet.  If true, Giannis may have one of the best resumes before reaching their prime:  Finals MVP, Championship, two-time MVP, DPOY, five-time All-Star, three-time All-NBA First Team, 3x All-NBA First Defensive Team.

In a postgame interview following their series win, Giannis reflected on what this championship meant to him.  “My mom was selling stuff in the street, and now I’m here sitting at the top of the top, I’m extremely blessed.”

It is safe to say that we will continue to see Giannis at the top of the top for many years to come.