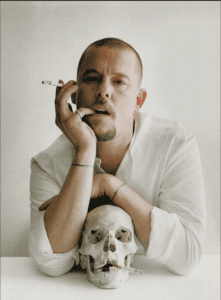 Lee Alexander McQueen is… was a legend in his own right. Anything this man put his hands on turned to gold. “Some are born great, some achieve greatness, and some have greatness thrust upon them.” -William Shakespeare

McQueen was a man who knew exactly what he wanted. He wasn’t afraid to be out there with his ideas, and wasn’t afraid to tell you exactly what he thought. He enjoyed pushing the limits, and honestly I think most ppl enjoyed watching him do it. Maybe it was because he was the youngest of 6 that he felt the need to be heard but regardless of whatever it was… It worked.

McQueen was and will always be the epitome of GREATNESS. Everything he did seemed so natural and effortless. A real diamond in the rough. McQueen has always been my biggest inspiration as an artist and fashion designer. When I’m creating I don’t think about how I can copy him but rather how I can someday be as Great as he was.

“When people recognise and respect what you do, that’s nice, but I don’t think you ever do this to be famous. Fame should be left to the film stars. We’re just offering a service.” -Alexander McQueen

A Fur Free Future for Versace and Furla.