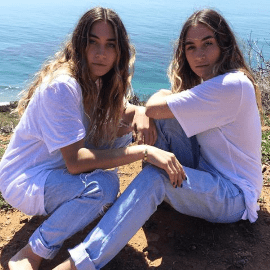 Allie and Lexie Kaplan are 23 year old twin artist. They’re originally from New Jersey but currently reside in L.A. where they are developing quite the names for themselves as artist.

The Kaplan twins have had some tough critics who challenge what they refer to as art. There are select people who instead refer to what they do as porn. As they have a knack for taking things to the next level. The type of work that the twins create are meant to be conversation starters. They most recently have painted a series of screenshots from the infamous Kim K and Ray J sex tape. It’s creating a lot of interest amongst ppl. The twins have also thrown themselves into the mix by exploiting themselves in a series of lewd paintings. The exhibit has probably the most original title: “Make Me Famous” at an art gallery in L.A.

An side note… Can we talk about the stark resemblance these girls have to the Olsen twins. I’m sure they get that all the time… but anyways…

The twins make it a point to mention, “they are not out to offend anyone…” In fact they have even mentioned admiring Kim K and what she’s been able to accomplish.

Think of the Kaplan twins as the modern day Andy Warhol painting his Muse Marilyn Monroe at her most vulnerable moments. I have a feeling we’ll be hearing about these two a lot more in the months to come. Also be sure to check out their “Boy Toy Project”. The twins have been selling stuffed action hero’s that they have been posing provocatively with, sleeping with, and photographing themselves with for $333 a pop. The idea behind it is over sexualizing any object to the point of making it desirable. I’d say these two are doing a great job.